Kymenlaakson Sähkö is a Finnish energy group owned by 10 towns and municipalities. Kymenlaakson Sähköverkko Oy is the distribution system operator for the group with a  distribution area that has some 150,000 residents and sells electricity to more than 100,000 customers. Kymenlaakson Sähköverkko Oy supplies electricity to four provinces – Kymenlaakso, South Karelia, Uusimaa and Päijät-Häme. They are in the frontline of Finnish energy companies with a focus on low-emission production investments. For example, over the past decade, they have invested heavily in the Vaskiluoto biogas plant, Santavuori, Torkkola and Metsälä wind farms, as well as the Voimapiha hydropower assets in Sweden.

Hepta Airborne already has multiple success stories with Finnish clients and excellent knowledge of the market needs and how to operate in the local landscape. Hepta has done both regular and storm inspections in the past for Finnish clients. One of the clients in the past was also Kymenlaakson Sähköverkko Oy, to whom we presented the current developments for after-storm inspections. The PoC tests, that were done after the strong autumn storm Aila, showed Hepta can offer substantial advantages to DSOs in storm inspections. Storm inspections using drones are 2-3x faster than on foot, depending on the landscape and enable the inspectors to conduct work without going under the power lines.

In the spring of 2021, Kymenlaakson Sähkö asked Hepta to do a visual inspection of the overhead lines in the Kotkan archipelago to detect fallen or tilting trees. As two days before there had been a large storm and the possibility of different hazards to power lines was high, it was important to start the inspection as soon as possible. The waters between the islands in the archipelago are often shallow and full of rocks, making them hard to access by boat during wintertime and stormy weather, thus the islands had to be inspected by drones piloted from the mainland.

Planned operations and their execution

The inspection flights were conducted in 01-02. March 2021. Strong wind and heavy snowfall complicated the inspections, lowering operational radius and line of sight. Although this did not deter the Hepta inspection team and their drones, pushing on and capturing as much data as possible. Flying against the wind, over the sea and in snowfall was interesting for even the most experienced drone pilots. Despite the horrid conditions, inspections were successfully completed in 7 of the 9 islands. In some cases, the drones were able to provide an overview, that would otherwise have been impossible to get, due to hard to pass or even impassable terrain. The results of the inspections themselves provided Kymenlaakson Sähkö with good news – despite the storm, no trees had fallen on the power lines, nor were any tilting dangerously near the power lines.

Storms are by their nature quite challenging for power companies – they can disrupt the network on a large scale and make timely defect detection and repair hard. With remote and hard to access areas, such as islands, the situation is even more difficult. Hours spent on waiting for a boat to get the inspectors on an island hit by the storm come at the expense of the islanders quality of life. The PoC flights in 2020 and the storm inspections done for Kymenlaakson Sähkö show that Hepta can offer a quicker and safer solution for this. Islands can be inspected from the mainland, saving time for the ground crews and allowing them to start repairs faster. Based on the information gathered from the drones, ground crews already know the situation on the islands and what tools and spare parts they need to bring there. This eliminates the need for back and forth travel between the islands. In addition to that, drones keep the inspectors away from possible hazards and give a better overview of the situation, especially in areas with a lot of vegetation. 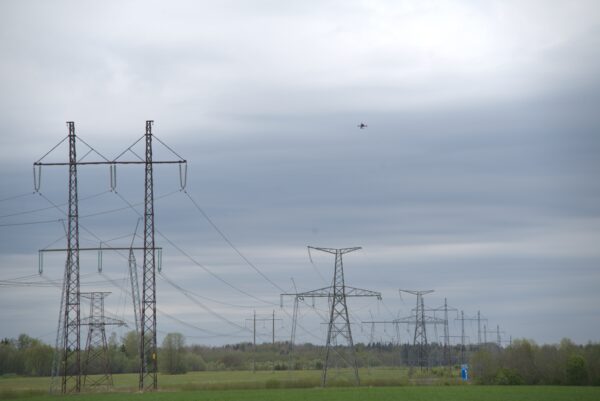