Hepta Airborne was invited by JSE to conduct an operative powerline inspection after autumn storm Aila in Mikkeli, Finland. The goal was to find the causes of blackouts affecting up to 1000 homes. The storm inspection with the drone was conducted in conjunction with the ground maintenance crew to fix the issues as soon as possible.

The weather was not very pleasant, with light rain and wind gusting up to 12-18 m/s in the region. In total Hepta Airborne team flew 5 km of lines. On 3 separate lines, we discovered 1 possible tree which may have caused the blackout. 2 small birch trees lying on the ground, and another line that had 1 tree on conductors.

The landscape has many lakes and inhabited areas which are time-consuming to cover on foot.

This was the first time to provide storm inspection as a service proof of concept (PoC) to JSE while KS has been Hepta’s customer for 1.5 years. In addition to the usual equipment, Hepta Airborne team member Ryan Saar was operating drone DJI Matrice M210. Ryan commented:

“For me, it is routine to use new, slightly upgraded versions of drones and I prefer to know the equipment so I could use it with my eyes closed. On the first day, just before the storm peak, we gathered with the client’s team in the morning at 10:00 to discuss what input and how I will give with the drones. Also, what are the capabilities for drones in storm inspection, and what are the next actions in the future. We were still waiting for the storm winds to fall the trees to start the line inspection. At 11:00 we gathered for weather prognosis for upcoming hours and the wind was strong. At 13:00 (1 pm) we headed to the object to start the work.

During the day we had a dilemma to choose between two options – to use M210 or Mavic 2 drone. The M210 is more storm- and weatherproof and has a powerful camera. Mavic 2 is ten times cheaper but it is not meant to be flown in rain and storm.

The first pick was Mavic 2 and it performed fine in the winds around 12m/s. We found a couple of trees which had fallen through the line but were not suspended on the line. 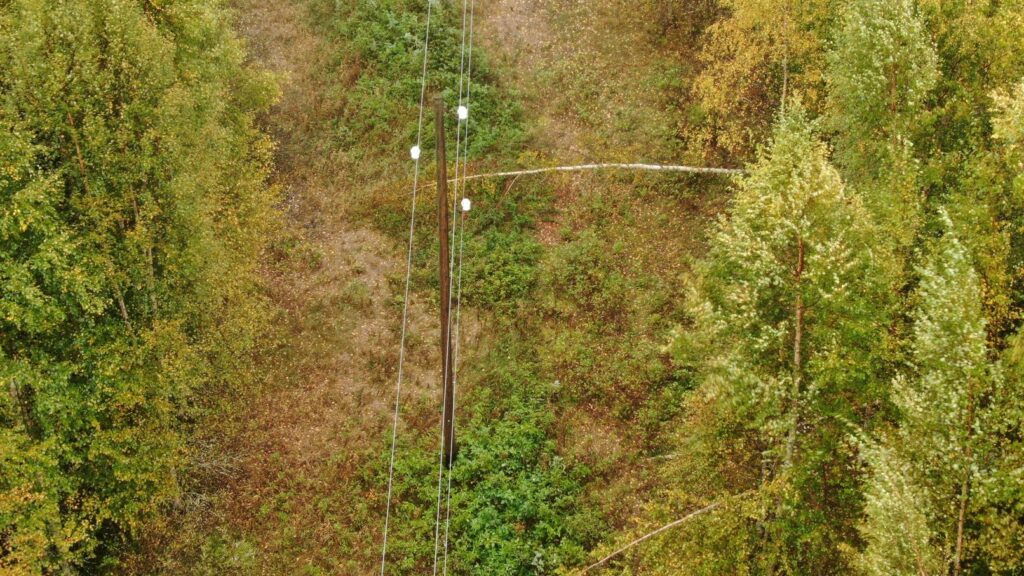 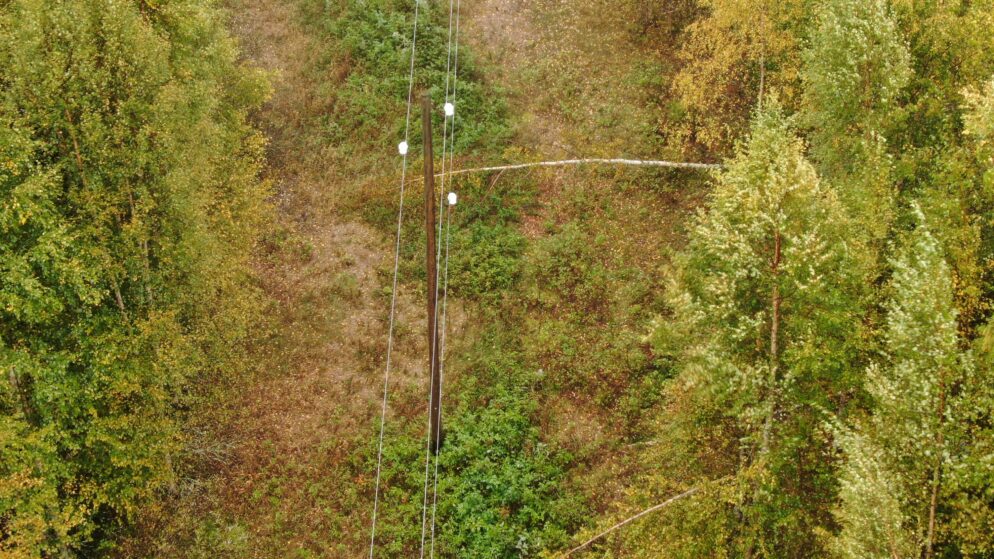 “We are interested in taking into use new opportunities with the best quality and speed. It is essential for us to ensure the permanent availability of electricity for our customers. Reducing power outage time is one of the priorities.”
Tomi Öster, Business Development Manager at Järvi-Suomen Energia.

In between breaks, we observed how the JSE team removed trees from the lines.

After this section, we drove to fly the drone in the next area. I sent the drone up, flew some distance, and felt suddenly a big gust of wind (I was outdoors while operating the drone). I knew it will reach also the drone soon and was prepared for the farewell. Mavic has a top speed of 72 km/h in mild wind, during wind gusts the speed dropped to 6 km/h. The drone stayed in the air and it was a good test.

In between, I made another inspection flight where the line was intact without any trees. Power was switched in and the reason for the interruption was something else than treefall. 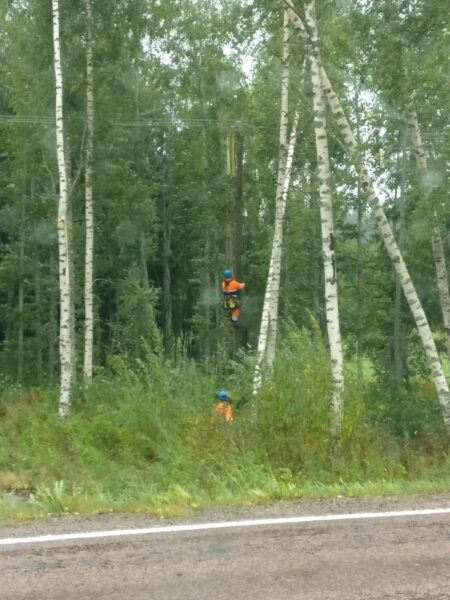 A picture from the last stretch of line on the first day. JSE team was curious and impressed by the capabilities of the smaller drone.

Finally, we found the culprit on this stretch of the line- a tree had fallen on the line. We forwarded coordinates to the JSE ground team so the crew could start fixing the issue and bring back the power to multiple households. We wrapped the up day at 19:00 (7 pm) and agreed to meet at the headquarters at 7:30 am and head out the objects.

The second area for storm inspection was 2h car drive away. An island, located about 1km away from the shore. On the way there we got a call that line got fixed and there were no more interruptions.

As I had not managed to fly M210 then I made a demo flight to show its capabilities. This drone surprised us all. It has a powerful zoom and can make objects along the line visible up to 1.8 km away. Not to mention it being more windproof than smaller ones. It is an excellent drone for storm inspection work and I enjoyed trying it in post-storm conditions.

I had already called it a day and preparing for a trip to head back to Estonia. Then I got a call from our project manager that KS is also interested in a quick inspection near the Lahti area. Most of the lines were near roads and I conducted the flights on my way back to Helsinki without major findings. The day ended at midnight.”

Night-time storm inspection of powerline with a spotlight in October 2020.

Hepta Airborne is the only one in the Nordics providing real-time storm inspection with drones 24/7. Including in challenging conditions: nighttime, high wind, and heavy snow.

Starting with drone-, helicopter- or satellite-based data collection, then analyzing data with the help of AI in uBird software and finally delivering the results to the client systems.

Hepta Airborne provides grid inspection services for DSOs and TSOs, railway, and communication companies in 11 Countries. In 2020 we are trusted to inspect 3000 km of lines monthly.