Hepta Airborne performed a partially automated railway utility inspection pilot project for Estonian Railways (EVR) in December 2020. EVR is a state-owned company that ensures the smooth operation, management, and maintenance of railway infrastructure, in addition to traffic management. EVR develops and maintains 1,214 km of railway infrastructure; including the rails, the powerlines that provide electricity to the trains, and the other utilities that need regular inspection and maintenance. 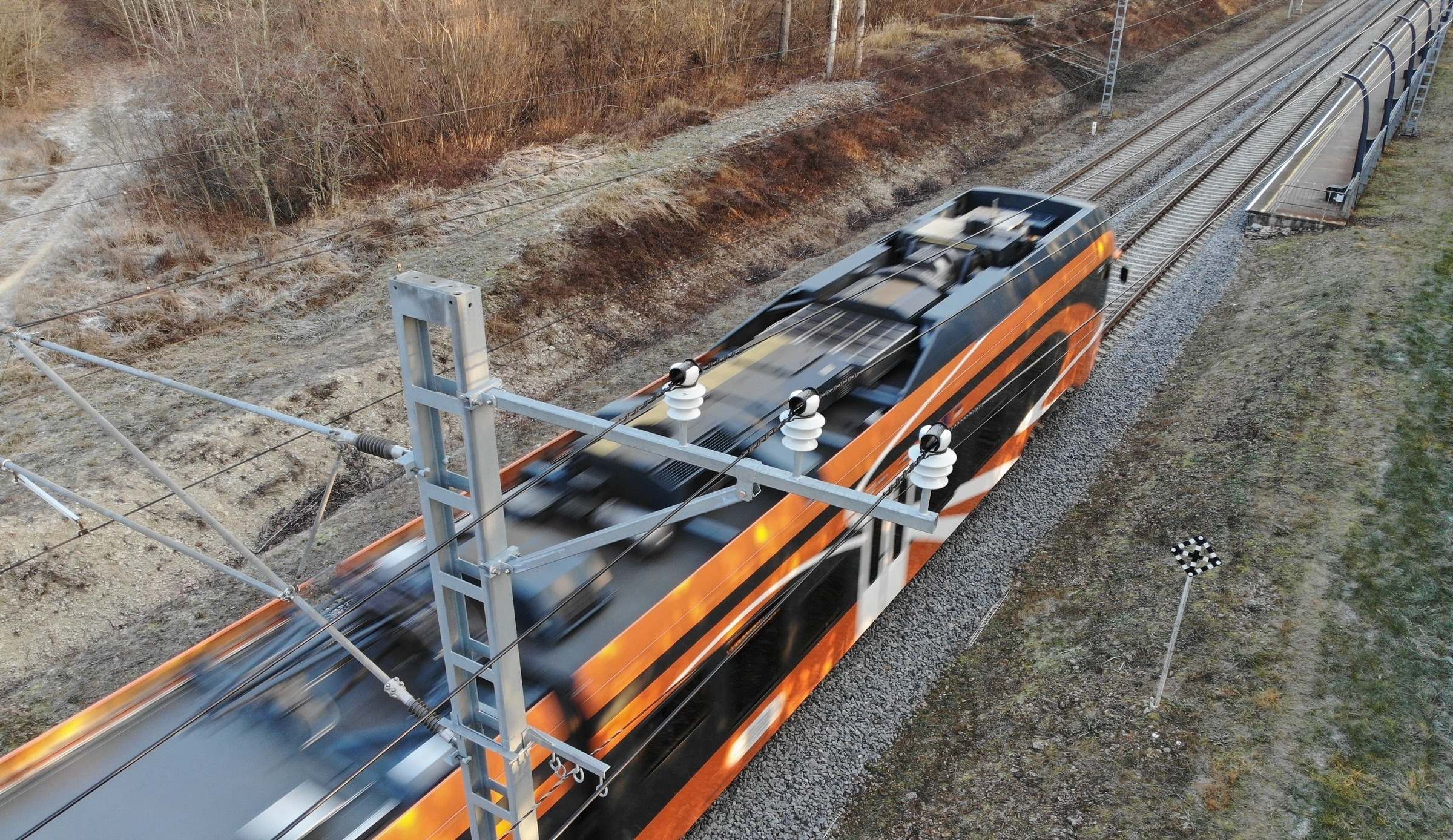 The goal for the pilot project was to apply innovative inspection methodologies to map railway infrastructure faster and without stopping railway traffic; while also increasing safety for railway employees. The project involved mapping as well as detecting any defects on the railway utilities using uBird software. uBird helps speed up the process of finding defects, mapping the positions of infrastructure objects, and creating actionable reports for maintenance teams. This was the first data collection and analysis completed of its kind with the railway grid in Estonia.

Traditional methods of railway utility inspection are hazardous work. Measuring and documenting such utilities are done manually, with employees physically walking along the railroad and under the lines. For example, marking the locations of poles and angles of crossings of pylons involves working on the railway, in a potentially immediate danger area, made all the riskier by electrical trains that make little noise and move fast. People who are deeply focused on their work generally pay less attention to their surroundings, which makes the chance of accidents all too high. When conducting inspections with drones, however, no people or aerial vehicles are put in harm’s way.

Mapping railway infrastructure also takes precision, and solutions that add speed to such manual work are in demand. Data gathered with drones, which is then analyzed by Hepta Airborne in the uBird software, provides additional input for EVR’s internal geoinformation system which maps their utilities. Input from the pilot project included the LiDAR point cloud, which was uploaded on a orthomosaic map and makes up the base layer for the data management system. In addition, a geo-referenced point cloud was created so the EVR team can take accurate virtual measurements of their infrastructure at any given time, without even going outside. For more in-depth defect detection, thermal imagery, as well as photographs of the railway elements, were also taken. 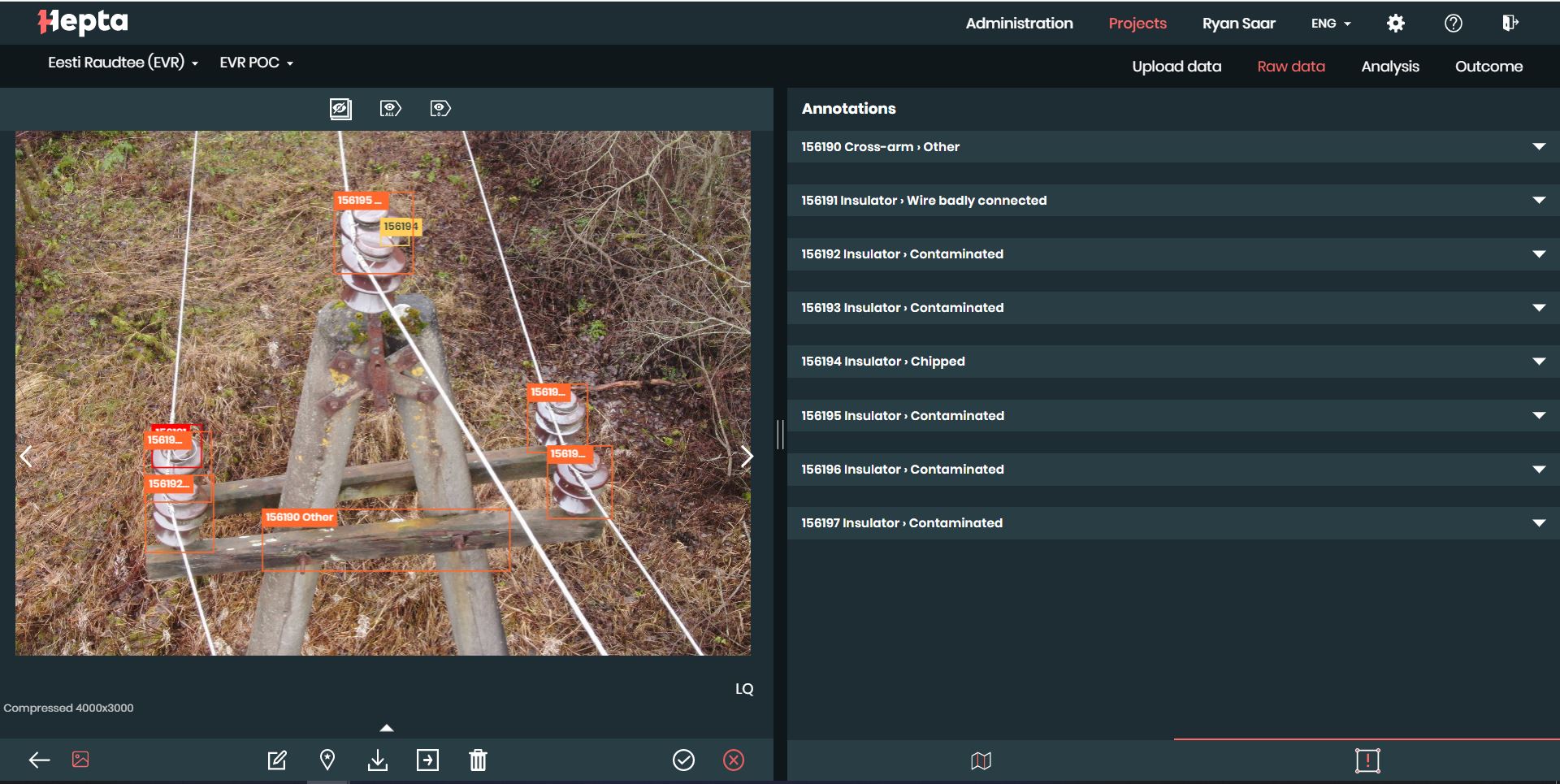 Notable defects – Lichen and other organic material on insulators that inhibit an insulator’s insulating properties and causes flashovers, wire tie loose on an insulator, rotten cross-arm, one broken insulator.

Although Hepta Airborne has years of experience inspecting powerlines with drones, this project required reviewing specific safety procedures to take into account the heavy train traffic on the stretch between Estonia’s capital of Tallinn and the nearby small-town Keila. The flight permits were easy to get as Hepta Airborne has long experience with local aviation services. This time though, extra communication was needed with railway traffic headquarters in order to notify train drivers about potential drone sightings over railway protection zones.

When inspecting power lines, the drone pilot sets the pace and schedule to overview a specific section. While working with the railway however, our drone pilots had to give the traffic center a heads up, and notify them if deviating from the pre-set plan.

Three different types of sensors were used on two different industrial drones: the DJI Matrice 600 and the DJI Mavic 2 series:

The Hepta Airborne Project Manager for the EVR pilot project, Eduard Vainu, highlighted that railway utilities have a lot of details that must be inspected and maintained: “The infrastructure is different than DSO or TSO utilities. The number of elements on a railway is significantly larger. In addition to a medium voltage line, there is the railway, vegetation, turning points, and crossings. We learned about many new, specific infrastructure elements for railways that can be added to uBird in addition to those we’ve seen on power lines. For example, railway corridors go in a straight line whereas power lines branch out like a web. This means that the automatic LiDAR flight was less complex to plan than for power line inspection. But the manual piloting of our drones to capture infrared images and inspect all of the railway details takes considerably more time than on power lines. While it was a new experience for us in terms of covering additional details, the process for such an amount of infrastructure was still faster than doing the work on foot.” This means that the benefits power line utility owners already get from drone inspections and the uBird platform can be applied to the railway as well.

On the EVR side, multiple specialists were involved because the utility inspection process impacts a variety of departments. A workshop was held that covered which type of data to check for in the infrastructure in a way in which every department received information that was valuable for their work.

“Railway utility inspection is currently conducted visually by our employees visiting the objects on-site. Our wish is to automate this process and find ways to evaluate the condition of utilities using modern solutions. The Estonian Railways has a strong interest in developing data systems further to have a good overview of the infrastructure. Therefore we were glad to conduct a pilot project with Hepta Airborne. Our goal is to digitize the whole railway grid in Estonia to improve inspection and maintenance,”  said Andrus Alas, the Head of Electricity Networks in Estonian Railways.

The project was conducted in a cold weather with minus temperatures. The temperature was not an issue for the technology, for thermal images the minus temperatures were even welcomed. The bigger the difference between the air temperature and insulator, the easier it is to detect anomalies. One of the problems was the small amount of daylight. Storm inspections, LiDAR, and thermo photos can be conducted even in the night-time, but making high resolution photos and orthomosaic requires daylight. In an Estonian December, however, there are only six hours of daylight, with the sun rising only a bit over the horizon. This means there are only four to five hours of daylight for productive work. In addition, flights were conducted with various weather conditions: sunny days, cloudy days, with snow cover, with rain and mist, this required the drone operators to use their full skillset to capture quality data. 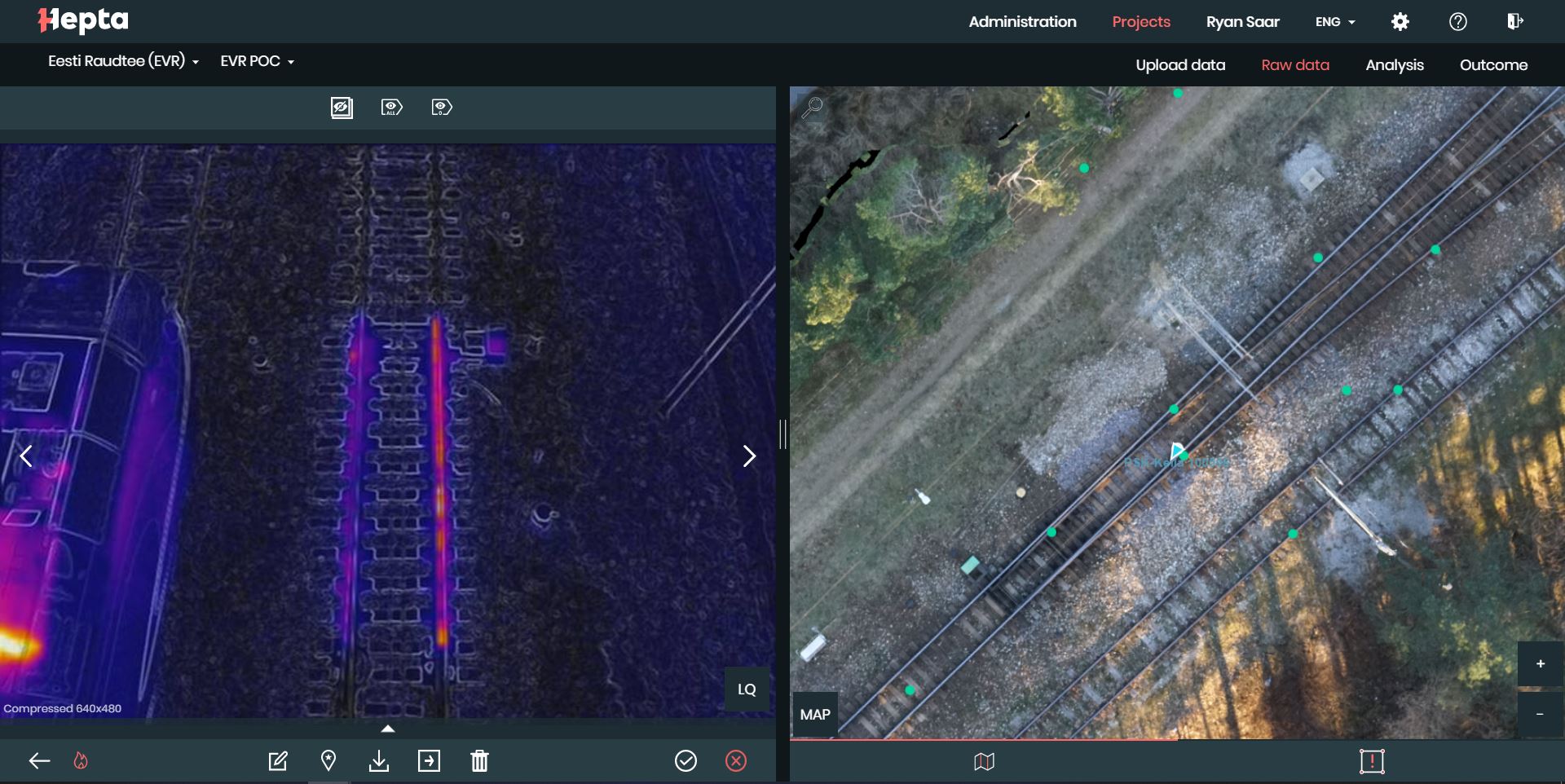 "The Estonian Railways has a strong interest in developing data systems further to have a good overview of the infrastructure. Therefore we were glad to conduct a pilot project with Hepta Airborne. Our goal is to digitize the whole railway grid in Estonia to improve inspection and maintenance.”
Andrus Alas, the Head of Electricity Networks in Estonian Railways

Analyzing railway utilities with uBird to map and find the defects

The captured data was transferred to uBird, the AI-powered utility analyzing software platform. Using uBird, Hepta Airborne’s analysis of the railway’s electrical distribution network was almost the same as for TSOs and DSOs. But, as mentioned earlier, EVR has numerous other infrastructure elements in addition to power lines that also need to be inspected. The uBird platform allows annotating defects, viewing infrastructure, and matching photos on the map as well as analyzing data with machine learning. Despite having experience in the transmission and distribution grid, Hepta Airborne had never previously inspected the full infrastructure of a railway. This new combination and application of drones and uBird represented a fantastic opportunity for the growing company.

Tie on the insulator is very loose. This defect is especially difficult to notice from the ground during on-foot inspection.

Results and input for Estonian Railways

These findings were the subject of a workshop held in February 2021, which was concluded one month after the pilot project. The goal, which was to get actionable data to improve set goals and focuses for future inspections, was achieved. In the next phase of the pilot project, the EVR team will explore the gathered data in the uBird software to specify a list of railway elements that can be visually captured with drones and analyzed in the uBird software. The aim is to speed up regular inspections; get more precise data of railway utilities; provide reports that are easy to use by the maintenance teams who conduct the repair work, and to make the process safer overall.