DJI recently released the newest version of their flagship camera drone, the Mavic 3. Due to their flexibility, small size, easy manoeuvrability and image gathering prowess, the Mavic series drones are one of the most used power line inspection drones in the world. So when DJI announced that they were preparing to launch the Mavic 3 series, the drone world took notice.

Seeing as Hepta Airborne uses the Mavic series drones quite often in their operations, we too wanted to try out the new flagship. To get an overview of what has been developed and what new capabilities are present in the new Mavic, we ran it through different tests and simulated an ordinary workday in power line inspections. 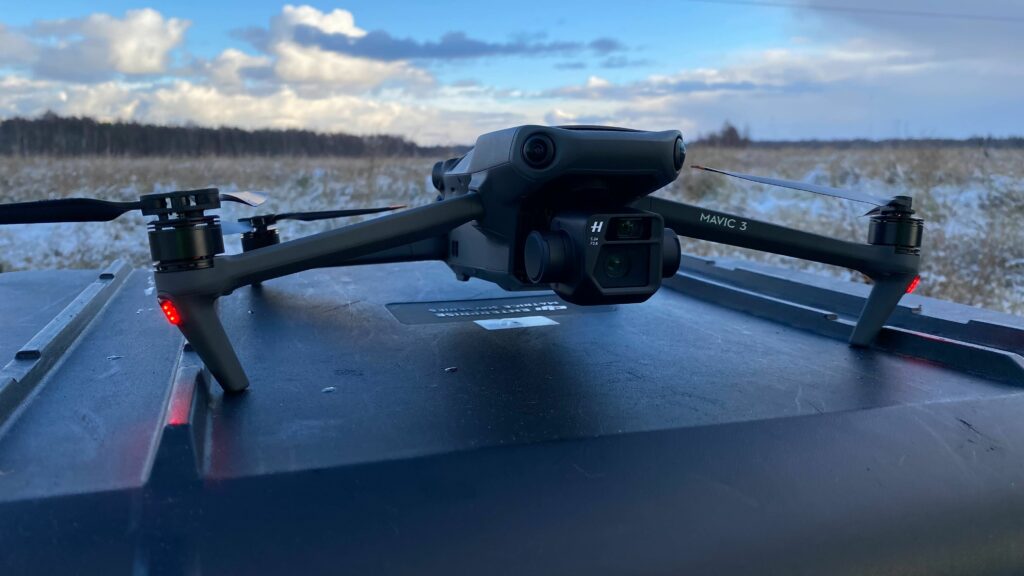 The biggest advancement that we encountered during our test flights was the increased flight time, which is has been increased by over 30%. This was a pleasant surprise and a much sought after upgrade in the drone community, as it allows to prolonge the operations and achieve more during flights. We liked the new battery placement, which moves the batteries inside the drone, thus helping to avoid them falling out or being crushed. The Mavic 3 seems to be a lot quieter than its predecessor. Also, it felt that almost all of the components, such as data transfer capabilities to USB-C charging had been upgraded, allowing for more flexibility in one way or another.

There were also two things that we did not like about the new Mavic. First of all, it does not have an IP rating, which means that it is not advisable to fly them in the rain. Which in turn will hinder its usage in some areas by quite a lot. Additionally, the controller for the Mavic 3 has seen a large downgrade, as it no longer contains a screen, where you could see basic information. This means that you have to bring at least a fully charged mobile phone with you every time you conduct a flight.

All in all, we would say that Mavic 3 shows a lot of promise, especially because of its increased flight time and is a worthy choice for anyone looking for a new drone.

Mavic 3 next to its larger relative, the DJI Matrice 300